The money illusion is an economic theory positing that people have a tendency to view their wealth and income in nominal dollar terms, rather than real terms. Drivers often cited for this phenomenon are a lack of financial education and lags that exist in processing price information in the real world.

Yale economist Robert Shiller conducted a survey in 1996 in which he sought to understand how consumers viewed inflation. One of the questions had to do with the psychology of inflation:

The results of economists and the general population surveyed are strikingly different. Economists overwhelmingly disagree with the statement that a nominal (but zero real) wage increase is satisfactory. Non-economists are split on the answer: 49% of individuals agree while 41% disagree. The data suggest nominal wage increases have a positive effect on consumer psychology, at least for some part of the population.

So why is that important now? These effects, when combined with demand-led inflation and wage growth in lower and middle income cohorts, can exert upward pressure on demand and stimulate economic growth.

Wages Are Increasing – According to the US Bureau of Labor Statistics (BLS) private nonfarm payrolls reports, real wages are actually on trend. The rate of increase from the July 2008 low is maintained thus far through the COVID-19 crisis, with real wages increasing +2.3% from December 2019 to-date. 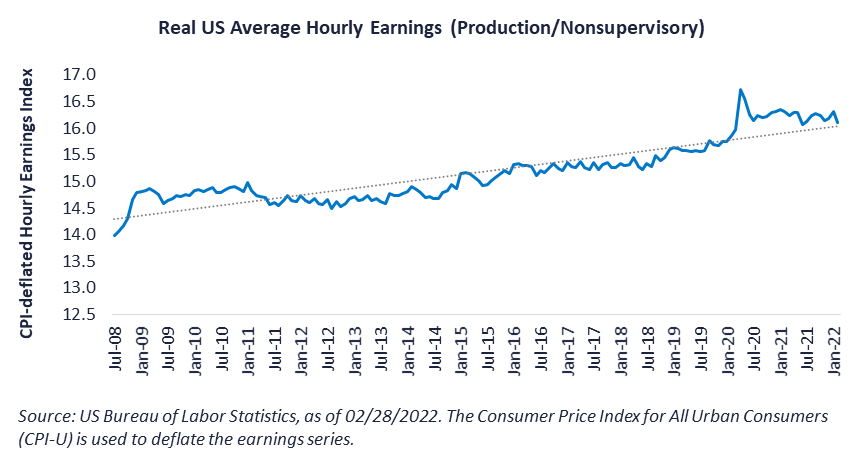 According to the Federal Reserve Bank of Atlanta (Atlanta Fed) wage tracker, the majority of the wage growth is localized in the bottom quartile of income earners. As of February 2022, the bottom quartile of earners have seen a 12 month moving average year-over-year median of +5.9% wage growth, while the top quartile has seen only +3.2%. This is a key insight as the low and middle earner cohorts have a greater marginal propensity to spend than the higher earner cohorts.2 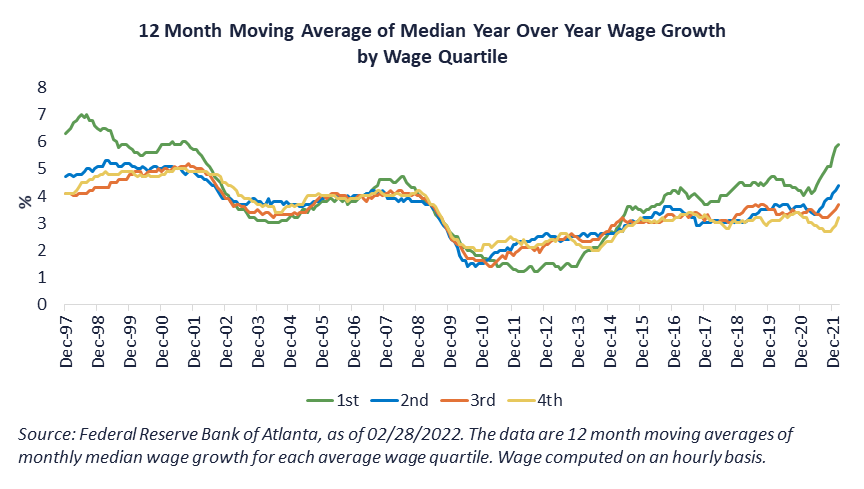 We believe this effect may have a continued effect on interest rates as well. A paper presented at last year’s Jackson Hole Economic Symposium supported the idea that a lower neutral rate of interest is related more to income inequality than worsening demographics.3 The idea is that very wealthy cohorts have a lower marginal propensity to spend and rather invest their savings, whereas lower wealth cohorts tend to spend their wage growth. If the relationship holds, wage growth in the bottom half of income earners should stimulate growth and raise the neutral rate of interest.

Inflation Narrative Versus Reality – The overwhelming market narrative around inflation today is that it’s bad for the economy and all asset classes except perhaps Commodities and TIPS (treasury inflation-protected securities), and might even crash stocks via a Paul Volcker-style interest rate hike sequence or simply destroy aggregate demand. This is likely because most market pundits and participants haven’t invested during a period of moderate to high sustained inflation. Let’s take a look at how stocks, bonds and commodities traded during the period between the recessions of 1973-74 and 1981-82, a six year sequence where the Consumer Price Index compounded at almost 8% per annum.

Both Oil and the S&P 500 compounded at 15%, Real Estate and the Bloomberg Commodities Index each at 9%, and T-Bills, T-Bonds and Corporates each at 6%, 2%, and 5%, respectively. Based on this historical analog, equities in aggregate faired just as well as oil which saw two massive supply shocks bookending this time frame.

While the hyper growth context of the equity market that has traded at nosebleed valuations has finally begun to discount this new higher interest rate regime, it’s important to remember that not all equities are hyper growth. A balanced portfolio construction process may provide better resilience when undergoing a macroeconomic regime shift.

If aggregate demand remains strong as the global economy reopens from the COVID-19 crisis (which current leading indicators continue to demonstrate), the dynamics of a demand-led inflation spike on higher wage growth and better subsequent demand could begin to change the narrative to be positive for equities in 2022.