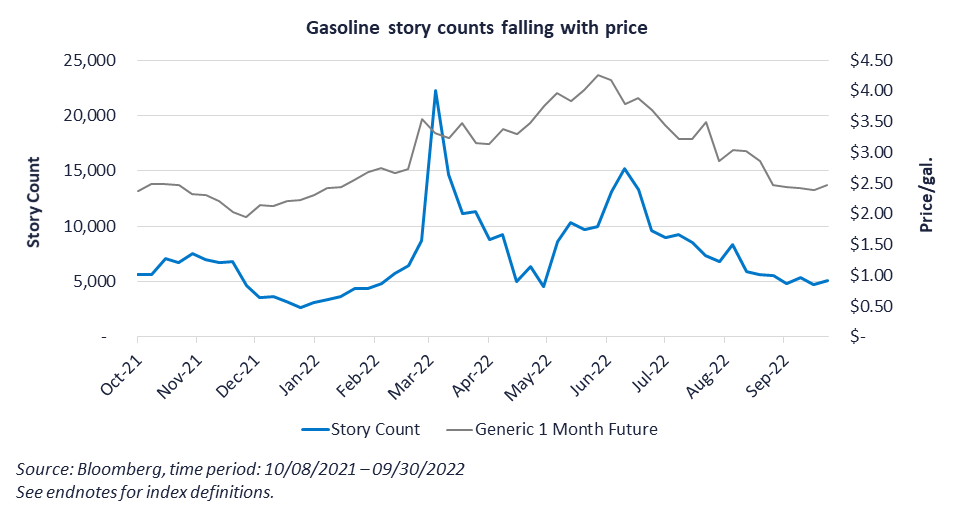 Since their highs in June, energy prices have pulled back significantly, with oil and gasoline falling 29% and 38% respectively.1 Although these drawdowns have coincided with similar decreases in general interest, it’s important for investors to keep in mind that many of the tensions that led to the initial price spikes have not been resolved but have merely gone dormant. 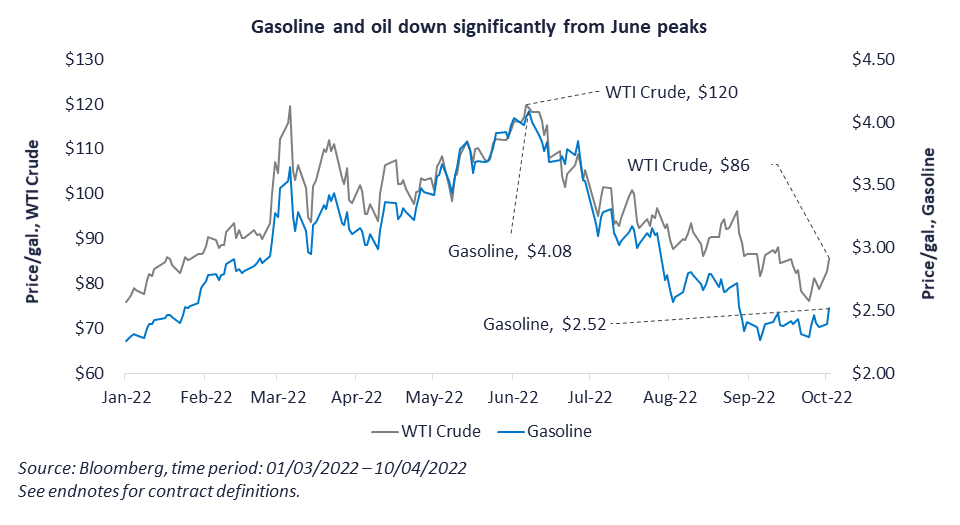 For the past several months, the Russo-Ukrainian War seems to have faded to the periphery for oil markets, with the oil futures curve retreating almost to its pre-invasion shape and level. However, there are currently two significant war-related events in the pipeline for oil markets: 1) EU sanctions already approved and scheduled for December 5th and 2) G7 and EU price caps on Russian oil. 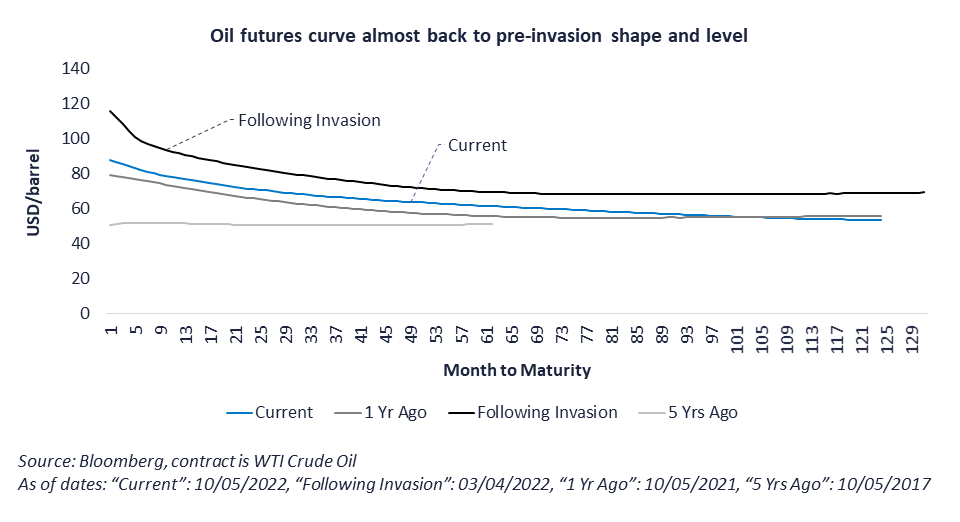 At this point it’s apparent that sanctions imposed to date have been ineffective, as both Russian seaborne export volumes and export duty receipts are above pre-invasion levels.2 The December 5th ban will theoretically address this issue by banning Russian seaborne oil imports to the EU, a move that would certainly raise global oil prices, ceteris paribus. The price cap is intended to counter this effect by permitting the flow of Russian oil so long as it was purchased below a certain price level, making the December 5th ban conditional. 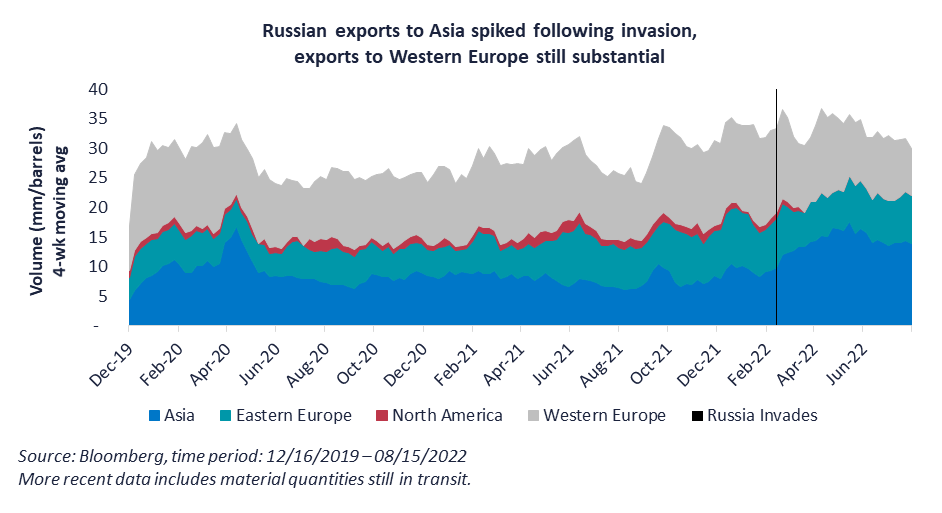 There is little clarity on how exactly this would work and how effective it would be, but both actions are likely to spark heightened volatility, especially if Putin follows through on promises to retaliate. Notably, the price cap, the piece intended to create downward price pressure, will be much more difficult to enforce.

As the US continues to draw on the Strategic Petroleum Reserve (SPR) and the G7 looks to implement price caps on Russian oil—both with the objective of pushing prices down—OPEC has agreed to cut output by two million barrels per day. Analysts have said the actual number will be closer to one million barrels, as several members are already producing below targets.3 This is still a material reduction from their 30 million barrels per day output rate at the end of September, but the signal that there is a floor in the price is perhaps the more important development.4

This is no doubt a frustrating reminder that the US does not control the entire global oil market. Doubly frustrating is the timing, with only 25 million barrels left to be released from the original SPR sale announced back in March.5 This raises the question of whether an additional release will be scheduled to counter the OPEC cut. Gasoline prices, which are tightly correlated with oil, are a huge issue with US voters, and increasing focus on this commodity heading into midterm elections is generally considered bad news for the incumbent party. There is likely intense focus within the Biden administration on keeping oil prices subdued at least until the midterms are over. 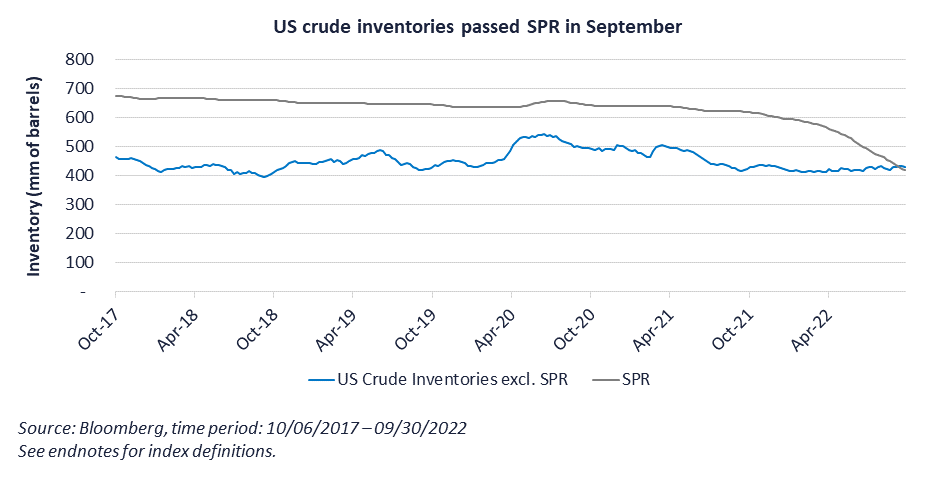 OPEC+, which maintains Russia as a member, may move to counter any additional measures by the US and its allies to push prices down. This is another indicator that the price cap may not be effective.

The forgotten side is still there

In August we wrote a note titled “The Forgotten Side of the Energy Equation,” in which we discussed supply-side issues such as underinvestment, limited refining capacity, and low inventories. As oil prices have come down, some of these issues have marginally improved, but will likely come back to the front on the other side of whatever downturn we may be headed for.

However, the state-sponsored pressures outlined previously are likely to dominate the media in the near term, and they have the potential to determine the price path as well. The massive competing forces on both sides of the market make it difficult to assess the directional outlook for the energy market, but it seems likely that volatility will remain or even increase in the coming months.