The Bloomberg Global Aggregate Bond Index, which tracks total returns from investment-grade government and corporate bonds, is in a correction for the first time in its history as central banks around the developed world execute rapid interest-rate hikes to combat persistent and broadening inflation. The most recent CPI reading in the US shows that while headline inflation is falling naturally due to declining energy prices, the slower-moving core inflation component is continuing to rise at its quickest pace this cycle. 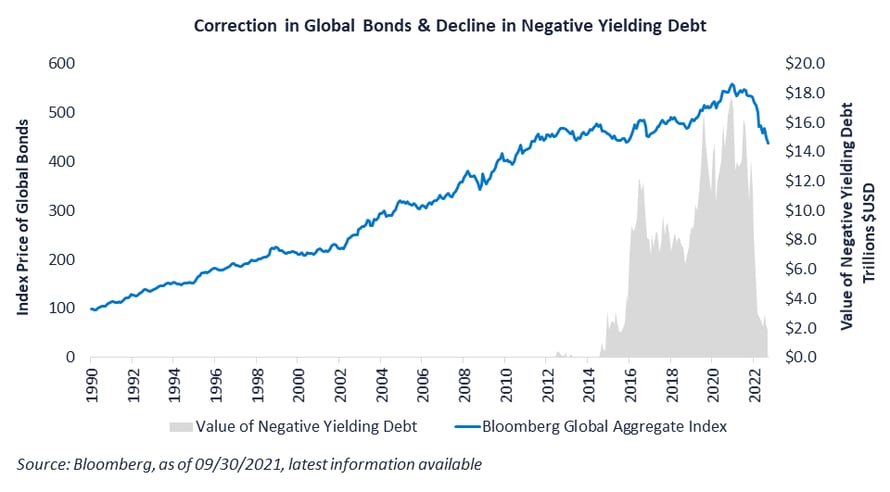 Bonds have had the highest Sharpe Ratio of all major asset classes over the last 40 years as unencumbered monetary policy availed cheap capital for the investment class to maximize profits, lower costs of production and spur innovation and competition, creating an extended period of price disinflation and declining interest rates. Looking back to 1900, however, bonds have a long-term Sharpe Ratio lower than that of equities, which isn’t surprising given equities are more correlated to human capital, nominal growth and consumption.

As bonds depart from their exceptionally high Sharpe Ratios of the last four decades, we believe investors should acknowledge the structural factors driving the trend component of inflation as they may contribute to a slightly stickier trend and more spikes in inflation going forward.

The dependency ratio, which is ratio of the number of older dependents to the working-age population, has been increasing sharply as the Baby Boom generation began retiring in 2011. The more workers the economy has relative to dependents, the more disinflationary pricing will be because one doesn’t employ someone else unless they expect the value of their output to be greater than the wage they are paid. Thus, an increase in the proportion of workers is generally disinflationary, whereas an increase in dependents is inflationary as they consume but do not produce, forcing wage increases across the labor pool. This relationship is expected to continue as more of the Baby Boom generation retires and lives longer than previous generations. 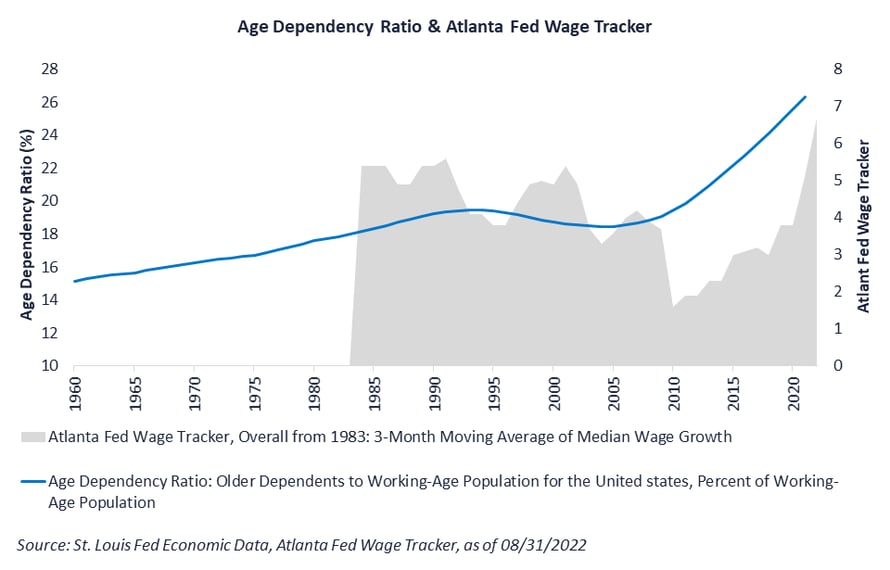 After having left his job as Federal Reserve Chairman in 1978, Arthur Burns gave a telling speech at the IMF in Belgrade entitled The Anguish of Central Banking. He states:

“My conclusion that it is illusory to expect central banks to put an end to the inflation that now afflicts the industrial democracies does not mean that central banks are incapable of stabilizing actions. It simply means that their practical capacity for curbing an inflation that is continually driven by political forces is very limited.”

Burns is referring in part to President Lyndon B. Johnson’s “Great Society”, an ambitious series of policy initiatives and programs with the goals of ending poverty, reducing crime and abolishing inequality. Until recently, it was the largest social reform plan in history. The legislation’s fiscal spend combined with that of the Vietnam War laid the groundwork for the initial surge in the Great Inflation.

Today’s income inequality and record lows in trust of the country’s institutions echoes society in the 1960s. The combination of Biden’s three plans and COVID-19 relief amounts to the largest fiscal stimulus in history as measured as a percentage of GDP. As we approach mid-term elections in November, the political climate may demand populist agendas from both sides of the aisle, which could reinforce its impact on inflation.

A Capital Cycle in Commodities

At the core of the last two years’ 30% annualized rally in commodities is a structural underinvestment in commodities supply amid the previously mentioned policy-induced rise in demand. The influence of environmental, social and governance (ESG) investment mandates and superior returns on capital from disruptive growth stocks led investors to significantly redirect capital toward the “new economy” and away from the “old economy”.

An illustration of this was in 2021 when the sum of the market capitalization of energy companies in the S&P 500 was temporarily eclipsed by Tesla. The overextension, misdirection and redirection of investment dollars seeking higher returns on capital among industries is called a capital cycle, and it can represent significant investment opportunities. 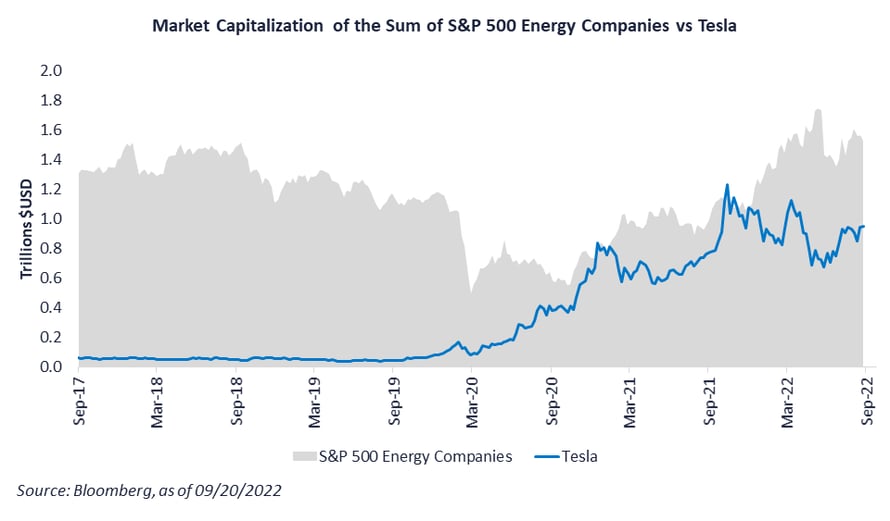 Unfortunately, the level of underinvestment in natural resources has left the world with inadequate supply to weather large shocks, exactly at the time when a significant amount of additional fossil fuels will be required to achieve the renewable energy agendas being set by governments globally. While energy prices will be volatile and influence inflation both up and down as the market anticipates changing energy demand going forward, the supply problem still exists and may reinforce a higher trend in inflation.

Given the bond market’s reaction to persistent inflation globally and the structural drivers that may keep a floor on the trend component of inflation, investors may seek to reexamine the assumptions of the role of nominal bonds in the portfolio and explore more inflation-resistant sources of income to offset portfolio inflation sensitivity.