Are Rate Hikes the End of the Commodity Run?

After two years of explosive returns in broad commodities, people will begin looking for a reason to call the top. Eric Hewitt, our Director of Research, addressed one potential culprit—the end of hostilities in the Russo-Ukrainian War—in last week’s Two Minute Tuesday, identifying this as merely the gasoline that was poured on the commodities bonfire. Another factor in the commodities expected return function is interest rates, and people may begin to point at rising interest rates as the variable that will put an end to commodities’ historic run. While higher interest rates can be a drag on commodity performance as it becomes more expensive to hold inventories, this is only true if interest rates are outpacing inflation rates, which have the opposite impact (i.e. real interest rates are the ones that really matter).

If we compare the current environment to the last time we saw a similar inflation spike, the late 1970s, we can identify a point in each time period when real interest rates, approximated here as the yield on the 10-year Treasury minus the year-over-year change in the Personal Consumption Expenditures Index (PCE), turned negative. By indexing the Bloomberg Commodity Index to 100 at that point and carrying the performance forward from there, we can get an idea of how the current bull run compares to that of the late 1970s. This also allows us to identify the real rate at which commodities began to falter and contrast with today’s real rate environment. 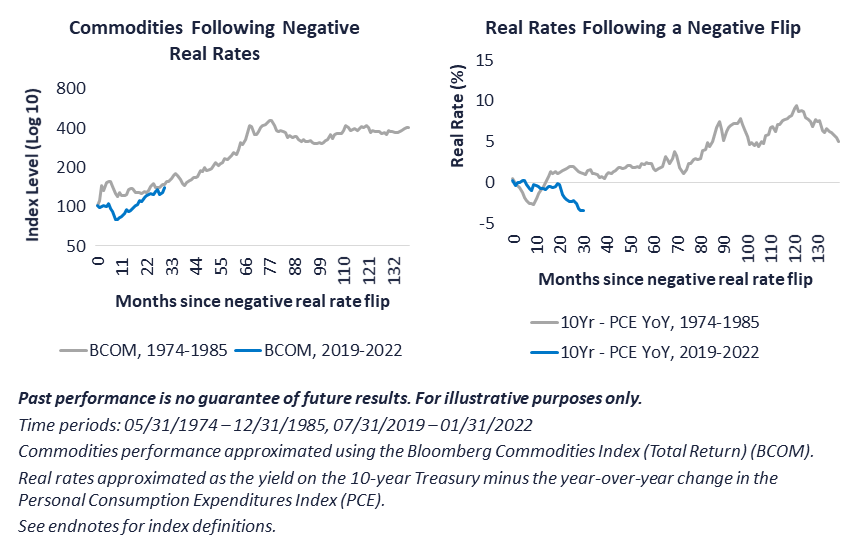 After flipping negative in 1974, real rates turned positive again 14 months later and floated mostly below 3% for the next five years. It wasn’t until a string of aggressive rate hikes in 1980-81, the magnitude of which is unthinkable today, that real rates began to climb steeply and commodity returns began to falter (identifiable in the charts above around month 80).

Today, we have real rates most recently at -3.43% (as of 1/31/22), and the Fed has only just begun to hike rates. Contrasting the Fed Funds Target Rate (FFR, upper limit) with PCE going back to the 1970s, we can clearly see the Fed was in the habit of either front-running inflation or at least hiking rates alongside it. The juxtaposition with the sharp spike in inflation over the last year and no movement in the FFR until March 2022 (not graphed) indicates the Fed may be behind the curve. 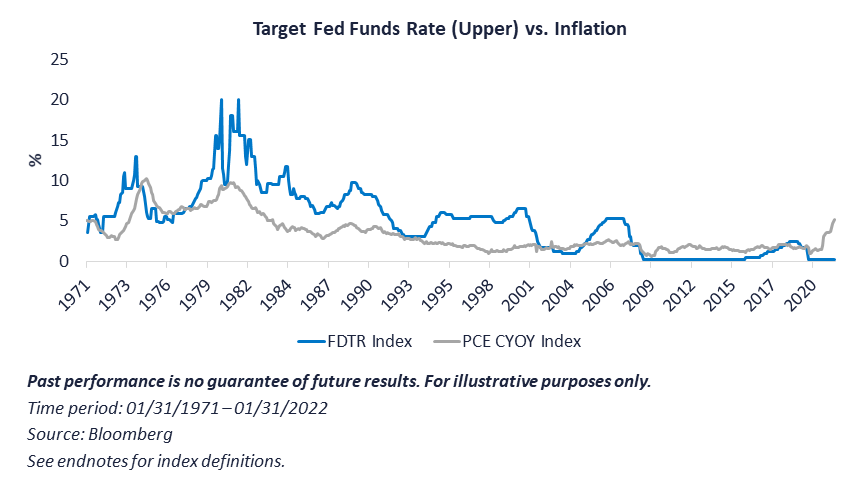 The current environment is obviously not a perfect mirror of the 1970s, and we shouldn’t expect this market to play out in exactly the same way. However, we’re all familiar with the importance of learning from history and its rhymes, and we believe this case is no different. We are still a long way from positive real rates, and history demonstrates even flipping back to positive real rates isn’t in itself the death knell for commodities. The fundamental drivers of the strong commodities market do not disappear even if the Fed follows through on its new hawkish rate hike schedule. Quite the contrary, it’s possible we enter a situation where small rate hikes have no impact on demand but actually begin to suppress production, thus exacerbating inflation instead of stifling it. To continue Eric’s bonfire analogy, the Fed’s garden hose may not be enough to put out the bonfire.

SS&C ALPS Advisors analyzes how the impact of the Bank of Japan’s actions and a volatile Japanese Yen reverberate through the interconnected global market.

SS&C ALPS Advisors analyzes the recent tumble in energy prices with a focus on the supply/demand side of the equation.

SS&C ALPS Advisors examines the uses and (misuses) of confidence in building portfolios.